If you click on a link and make a purchase we may receive a small commission. Read our editorial policy.
About Aftermath

Some designers are flirts, who like to play the mechanical field. Others prefer to focus on one concept or genre. Watching them work, refining that precious core over iterative releases, can be a special pleasure. One such designer is Jerry Hawthorne of Plaid Hat Games. His particular niche is co-operative fantasy adventure titles featuring cute anthropomorphic critters.

Aftermath is his third outing in this vein, following Mice and Mystics and Stuffed Fables. If you've played either, you'll see their influence here. In particular, it retains the adventure book from Stuffed Fables in place of a board. Instead, every open page is your board: on one side, a small map with asymmetric spaces. On the other, a melange of text, options and map-specific rules reminiscent of a Choose Your Own Adventure book.

In place of the child-centric cuteness of the earlier games, Aftermath has grown up. A little, at any rate. Rodents are still a central fixture, as you might expect from a designer whose Twitter handle is @mice_guy. But these mice are struggling to survive in a post-apocalyptic urban wasteland, free of humanity. It's still appealing to older kids, but the tone of the narrative is notably darker.

Your first mission is a search for junk food. You take the mission card and move your party token across a gridded overland map. Each square you enter has a page reference which you find in the book. Most see you draw an encounter card to seed the space with enemies. Then you play through the page, moving miniatures on the map, reading numbered text and turning over tokens to grub for resources. 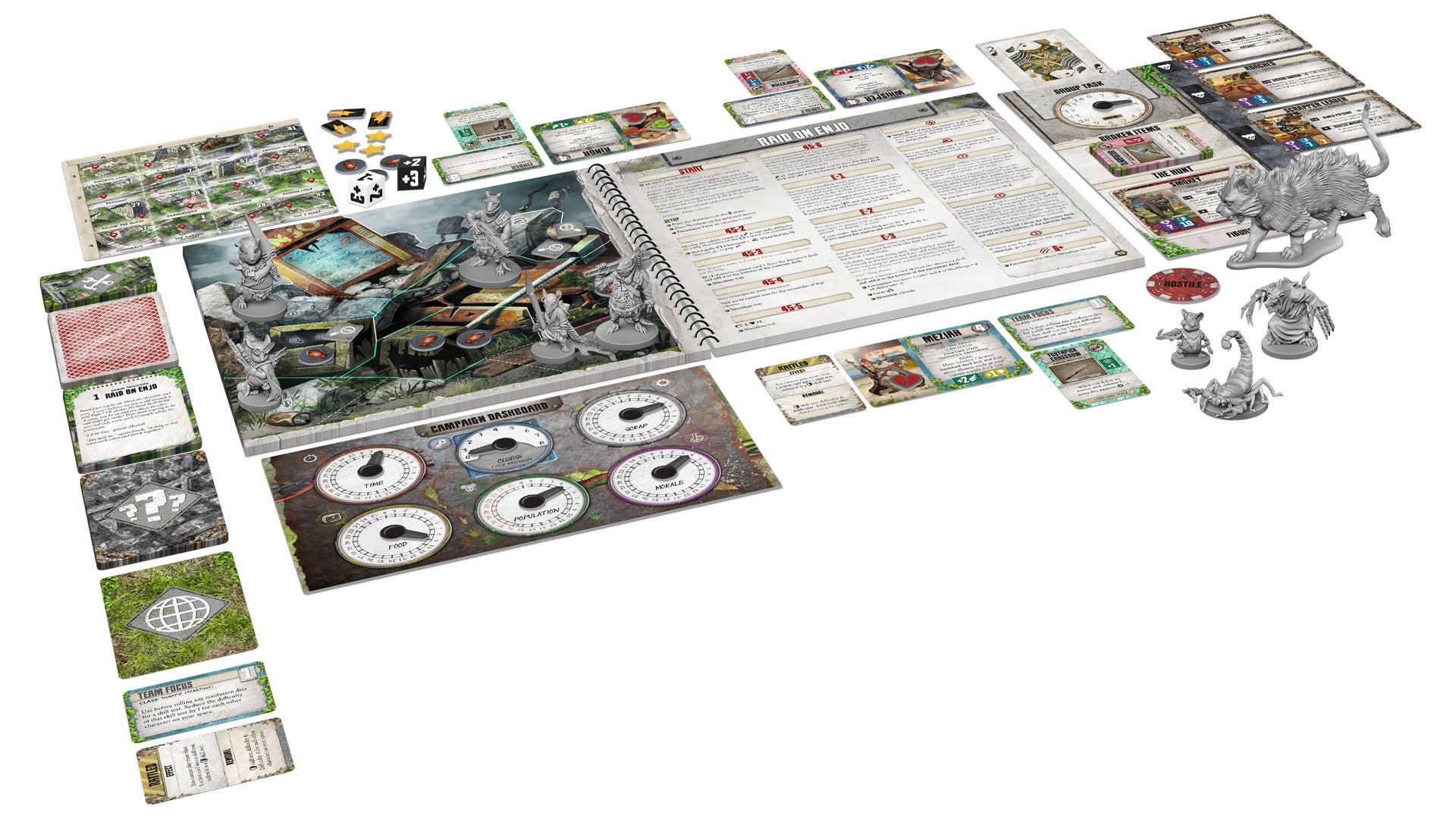 That first mission feels ill-conceived. One player reads out a wall of text to set the scene. As you flip through the pages, they burden you with more and more special rules. Some are printed on the page, others get added through the draw of environment cards like Low Visibility or Forced Movement. Aftermath isn't a complex game, but the constant coming and going of rules makes play slow and clumsy.

Then you reach the end, and the magic happens.

During your first game, you'll gather resources like scrap metal or food and tick your finds up on little dials. It isn't clear what this is for, only that Aftermath is a campaign game. As you might guess, these dials come into play when you complete a mission. Succeed or fail, those dials will swing up and down, as you feed your population and bolster their morale.

If you've taken too long on your mission, bad events will happen in your absence. You can ameliorate some by spending scrap to build structures like a lookout tower. Other buildings unlock new abilities: a marketplace, for example, allows you to start trading scrap for food and vice versa. When you're done, you pick a new mission card from the stack you've unlocked and sally forth once more.

It's hard to overstate how addictive this slow drip is. Although the writing itself isn't especially great, it weaves together with player choice and colony building into something unique. After a game or two, the numbers on the dial start to pop into life in your imagination. You begin to care about the fate of these fictitious rodents in their hard world. They become your responsibility.

Fantastic components help the illusion. The ink-washed figures, including an enormous cat, are great, as is the art. A series of tuckboxes make it easy to pack up and "save" your game state between missions; although the lure of expanding and upgrading your nest will often keep you playing longer than intended. 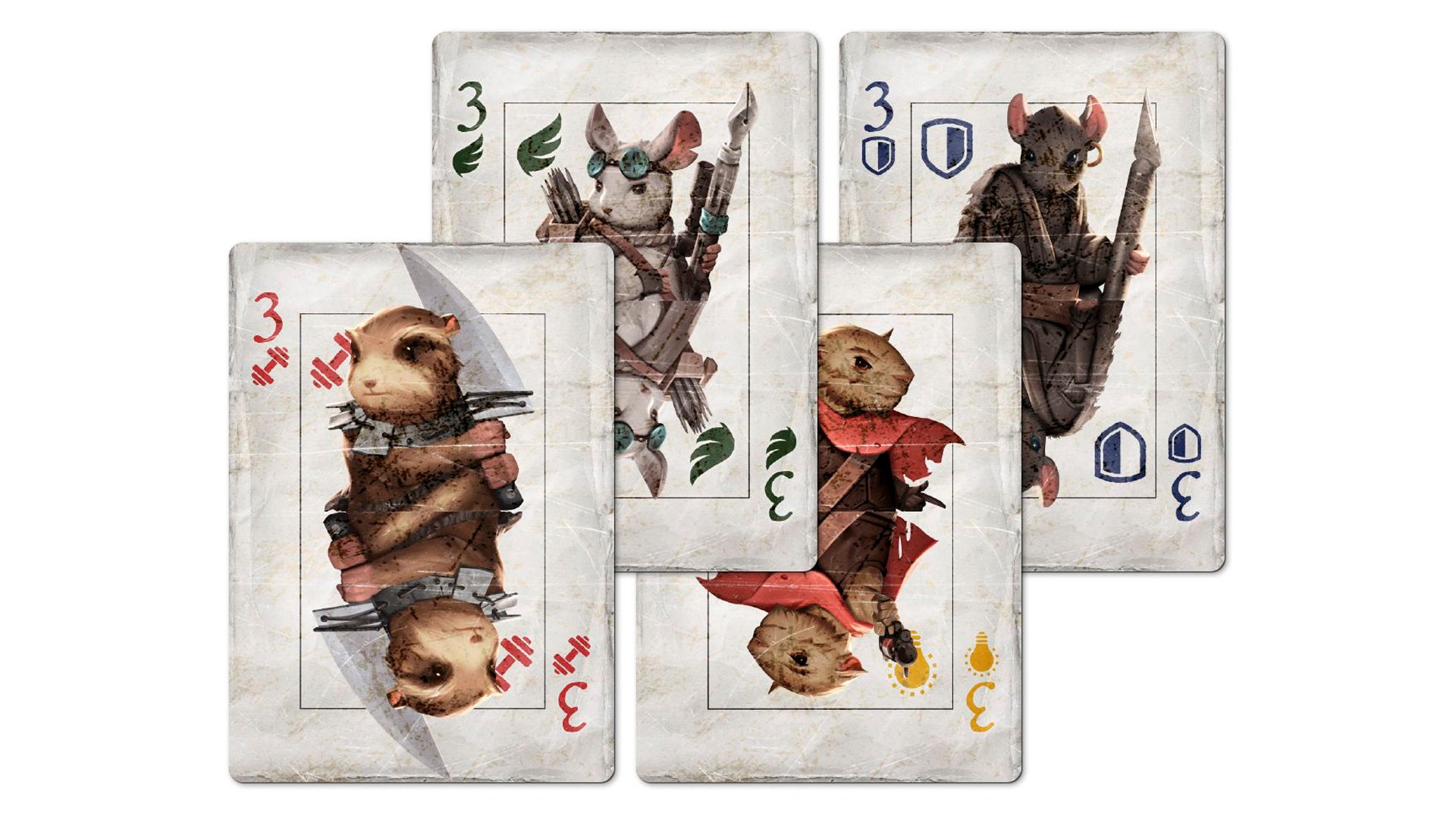 In each mission, the interplay between the various boards and decks of cards throws up an impressive amount of variety. There are straight-up fights and escort duty, resource hunts and stealth missions, and plenty more besides. Despite the diversity on display, the more you play through, the more the game feels dogged by a dragging sense of repetition.

The first sign you'll see is in the core way you resolve actions. On your turn, you'll draw up to a hand of five cards. They're lovely things, styled after playing cards but with rodent royalty and different suites. You play cards of a given suite to attempt an action: melee or missile attacks, movement or searching. Add bonuses for skills and equipment, modify with dice, and compare against a difficulty level to see if you succeed.

There's some strategy here, especially given that one action is to hand cards to other players. But using the same rules whether you're sticking a steak knife in an aggressive tomcat or pushing a heavy packet of snacks soon gets samey. It's also frustrating and sometimes bizarre. If you want to fight the scorpion in your space and get a hand of search cards, there's not much to do except get down and search in the middle of combat.

Amid the deck, there are threat cards, which cause enemies to activate, and a Joker that has an extra-nasty scenario-specific effect. The danger of drawing them keeps the action phase exciting. Even then, despite a range of enemies, many play out much the same. As the missions unspool, you'll visit the same location pages again and again. Later, you can unlock toy cars and the like to speed transport, and the random encounter seeds and story help, but it's hard not to feel a little déjà vu.

Yet that nagging sense of duty will pull you onward. There are mouths to feed, structures to build, bosses to battle and defeat. It's possible to lose, unless you're playing the "infinite lives" mode, in which case you must reset the legacy elements of play and start over. Same if you win, by satisfying the goals of all four in-game characters. Either will likely prove a repetition too far for most, although there’s plenty of enjoyment until you reach that point. Another iteration may be required before Plaid Hat squarely trap this particular mouse.