If you click on a link and make a purchase we may receive a small commission. Read our editorial policy.
About Fantastic Factories

Any functioning machine depends on dozens and dozens of parts, all working in tandem to create something productive. A car requires pistons, belts, valves and spark plugs in order to work properly. Without one element pulling its own weight, the whole thing falls apart into a heap of scrap metal. It’s this conceit that clanks and whirrs at the heart of the engine-building genre. Here, in this engineer’s utopia, a loose collection of nuts and bolts all come together in pursuit of a more productive apparatus.

Engine-building games are characterised by a build-up of available actions - you’ll typically start with just an option or two, and build upon them until you have a tableau of actions before to choose from. In many ways, Fantastic Factories is the genre laid bare. There are no bells and whistles here, just a perfectly functioning machine that, as it happens, you’ll be assembling yourself. Even the game’s theme makes no attempt to hide its intent. Your endeavour begins with only a headquarters and a hand of four potential new buildings. On your first turn, you’ll only be able to place your workers - four dice, in this case - on one of the three available spaces in HQ; you can either draw new blueprints into your hand, generate energy, or mine for steel.

From there, things ramp up in the best way possible.

You see, Fantastic Factories is a game of momentum. The first turn or so is spent building up resources that you’ll use to construct new buildings from your hand, or activate existing ones you’ve built previously. If producing this cache of resources represents tossing a snowball, then spending them is the thing rolling downhill and growing in size. 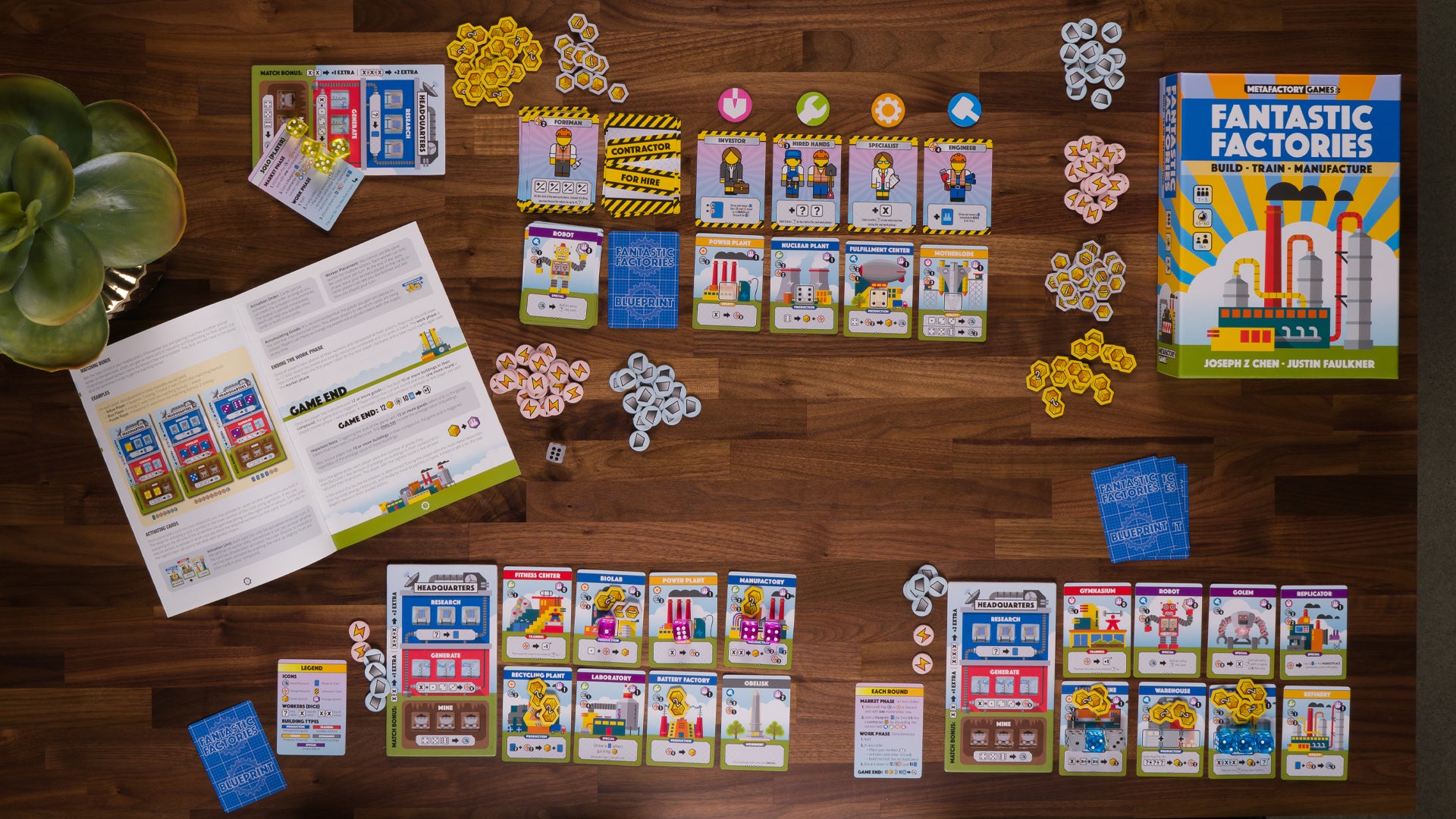 At the start of each round is the market phase where players choose a face-up card from the marketplace; it’s made up of four potential new buildings and four contractors. When picking a blueprint, you simply take it into your hand. In order to use a contractor, which are one-time-use bonuses, you must discard a card that matches its symbol.

Once everyone around the table has had a chance to grab a new blueprint or use a contractor, you move into the work phase. This is the meat of the game, where you’ll operate the machine you’ve been carefully assembling. During the work phase, after rolling your four worker dice, you can perform three possible actions in any order and as many times as you’re able to pay for them. You can spend resources and a matching card type to build a new blueprint into your compound, place a worker into one of the aforementioned HQ spaces and activate cards you’ve already played.

The work phase is performed by all players simultaneously, which all but eliminates downtime. The game ends when someone’s engine produces 12 goods resources, or when they’ve built ten buildings into their tableau. This can occur abruptly, because where Fantastic Factories shines brightest is in its insistence that you never stop working to make your machine more productive.

As you can build and activate in any order you want, it’s up to you to spot the combo potential within your engine. For instance, you might construct a Motherlode building using three energy and one steel. You can then activate it with a die of any value to gain one or two steel, which you can use towards building a Power Plant. Then, you can activate the Power Plant using another die to gain back some of the energy you spent on the Motherlode.

This is a very basic example, but it’s this combo-heavy approach that drives the gameplay of Fantastic Factories. The buildings you choose to build need to synergise, but you don’t need to think too hard about it thanks to some elegant design choices from designers Joseph Z Chen and Justin Faulkner. 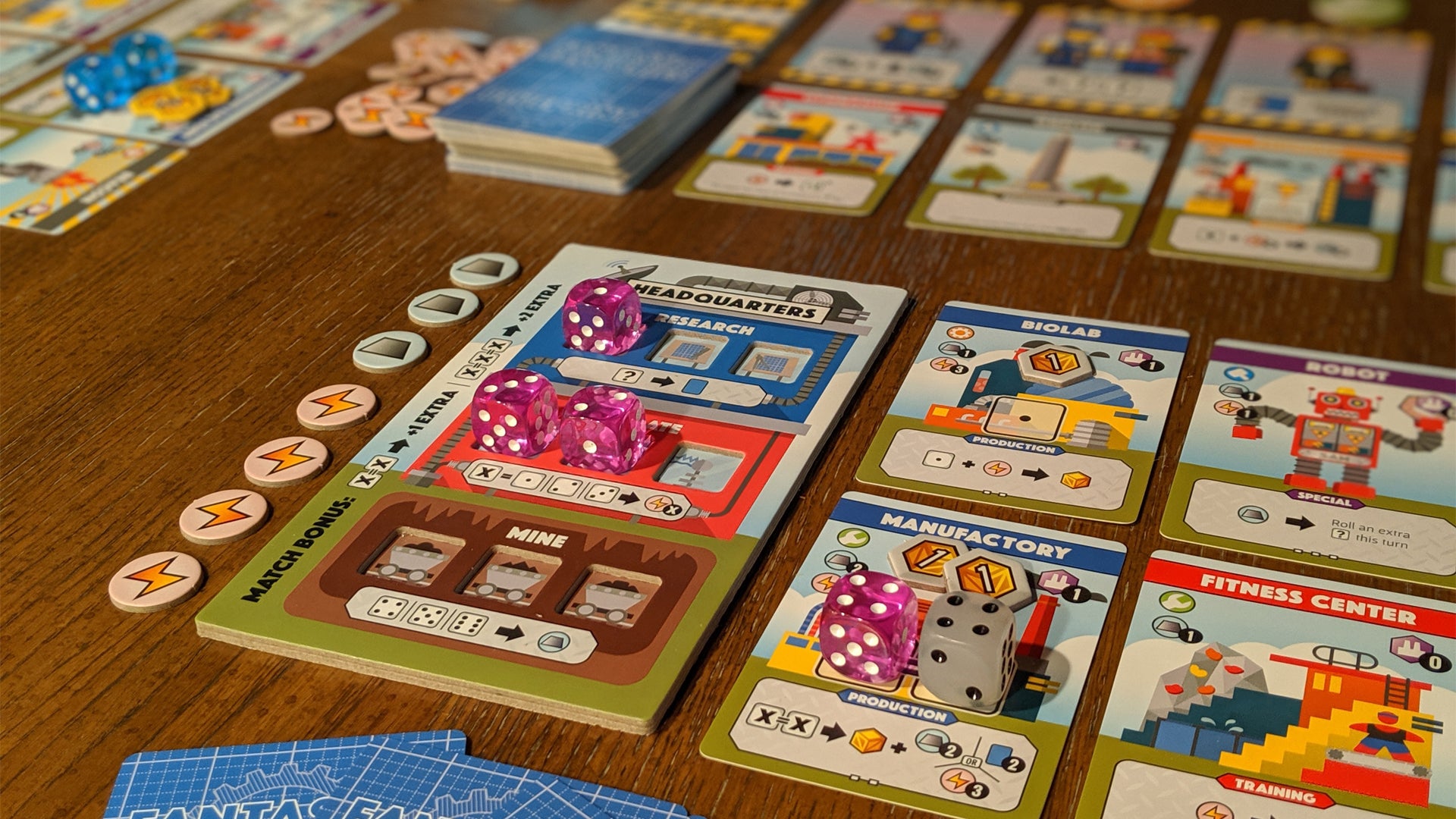 Buildings are divided into five distinct types: training cards, production cards, utility cards, special cards and monuments. The first three will usually form the foundation for your engine; training buildings let you manipulate dice rolls, production cards produce resources and utility cards focus on exchanging one type of resource for another. In most cases, if you make sure to spread yourself evenly across training, production and utility buildings, you’ll be able to remain competitive thanks to a sort of natural synergy that exists across building types.

This speaks to an impressive attention to detail on the part of Chen and Faulkner. It also means that Fantastic Factories is an extremely approachable experience. The engine-builder genre is rife with rules-heavy, multi-hour epics, but Fantastic Factories usually plays in less than an hour, making it an absolute godsend for time-strapped engineers.

If you’re looking for Terraforming Mars-levels of complexity, though, you’re likely to be disappointed. Fantastic Factories may be an engine-builder through and through, but it’s aimed squarely at a more casual audience. Also, there is a substantial dependence on luck thanks to card draws and dice rolls, which may turn off those who prefer a larger dose of strategy. Leaning into the training buildings allow you to mitigate this a bit, but not eliminate it entirely.

Still, there’s a sense of genuine satisfaction that comes along with building your engine. As your machine slowly begins to take shape and rev up, you’ll notice a feeling of ownership begin to creep in, even if luck wasn’t on your side. Yes, it may putter and wheeze from time to time, but it’s your engine, and no-one else’s. Discovering the combos it’s capable of is surprising, too, which lends some personality to the mechanism, just like the engine ticks and squeals of your old 2004 Chevy Colorado.

When all the parts are oiled up, Fantastic Factories runs just about flawlessly. It’s a refreshingly simple take on an historically-complex genre, making it the perfect entry point for budding engineers. The short playtime ensures the game’s quirks do not become faults, and the lack of downtime between turns keeps things moving at a satisfying pace.

Truly, Fantastic Factories lives up to its name.