If you click on a link and make a purchase we may receive a small commission. Learn more.
About Cthulhu: Death May Die

Let’s get one thing out of the way: I hate HP Lovecraft. But with its combination of gorgeous production, dramatic tension and action-packed gameplay, Cthulhu: Death May Die is the first Lovecraftian board game I’ve ever truly enjoyed.

While I’m probably in the minority, I’ve always found his work overwrought, melodramatic and not remotely frightening - the kind of florid, flapping prose that makes me wonder whether he was being paid by the adjective.

Nevertheless, his legacy has wrapped its tentacles around horror fiction. Along the way it’s also slithered into other media, including games. From the Call of Cthulhu RPG to board games like Arkham Horror and Mansions of Madness, there are plenty of opportunities to confront mind-warping monstrosities on your tabletop. Now there’s another to add to the pile.

Co-designed by Rob Daviau (Pandemic Legacy) and Eric M. Lang (Blood Rage), Death May Die casts players as investigators attempting to prevent squiggly extradimensional monsters from destroying humanity. From the moment you set eyes on its box, it’s impossible not to be impressed by its aesthetics.

Its brooding cover art features Cthulhu shrouded in shadow, with his malevolent eyes glowing out of the gloom. Open it up and you’ll find a collection of miniatures representing your heroes and - more importantly - the legions of otherworldly horrors standing in their path. There are maniacal cultists, cannibalistic ghouls, hideous fish-human hybrids and, of course, a host of weird beings with membranous wings, probing tendrils and flesh-shredding claws.

It’s an intimidating amount of plastic, even though the retail release lacks some exclusive figures included with the Kickstarter version (as well as a ridiculously large giant Cthulhu add-on). But it takes more than good-looking minis to make a game, and while on first inspection Death May Die might seem like a fairly run-of-the-mill co-operative dungeon-crawler, it quickly reveals some fantastic touches which help it stand out from the sea of other Cthulhu-themed titles. 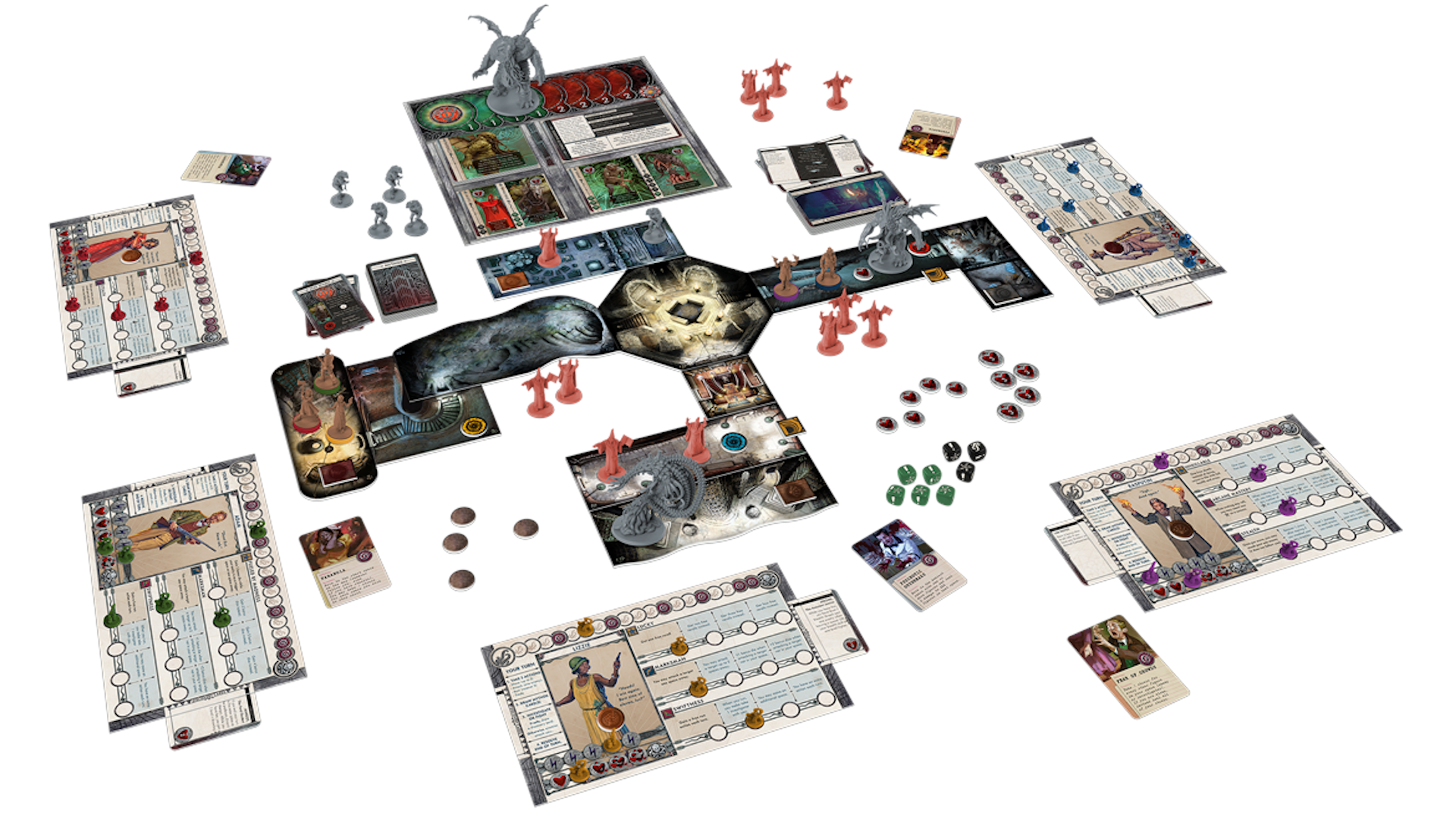 Each time you play, you’ll set up one of the six scenarios included in the box. Each of these episodes comes with its own environment to explore, with a modular board made up of tiles showing different rooms, passageways, crypts and cellars. You’ll also face different collections of enemies, all with their own strengths and vulnerabilities, meaning you’ll need to adapt your tactics to a revolving line-up of threats.

One thing remains constant, though. In every playthrough you and your companions will attempt to interrupt a ritual designed to unleash some horrible monster upon the world. With the summoning incomplete, they’ll be in a weakened state - leaving you theoretically able to swoop in and dispatch them to the interstellar void from which they came.

On each of your turns you’ll be able to move between areas of the board, battle enemies in simple dice-chucking combat or scour your location for useful items or allies to aid you in your fight. The ingenious bit, though, is the way the game embraces the core Lovecraftian concept of characters having their sanity sapped by exposure to incomprehensible nightmare creatures.

As well as taking physical damage, you’ll track your gradual mental disintegration. Whenever you reach a new level of insanity, you’ll get to power up one of your skills: moving faster, dealing more damage in combat, taking extra actions on your turn and shrugging off wounds that would leave any normal person incapacitated on the floor.

It means you’ll actively throw yourself into harm’s way, exposing your character to just enough danger to gain vital power-ups, while making sure they don’t end up either dead or hopelessly lost to insanity. The result can verge on slapstick, with investigators hatching crazy plans (“I’ll run through the burning room full of monsters to draw them away from your path!”) and making dramatic last stands which can be heroic, idiotic or a little bit of both. The need to push your characters to breaking point means they’re not all likely to make it through the game; in our first playthrough we won a knife-edge victory, beating the scenario with the last dice roll of the last turn, using our last surviving investigator on their last remaining hit point.

Death May Die has a deep-seated action-movie mentality: like someone created an adaptation of Lovecraft’s work starring Dwayne “The Rock” Johnson. It’s worth noting that its cast of characters is one of its real strengths. Each investigator comes with their own set of skills: close combat specialists, ranged sharpshooters, double-tough meatshields and stealthy, sneaky assassins. Like any good co-op, the key to victory is using these individual abilities in a coherent and coordinated way, setting up chains of actions across multiple players’ turns to deal with emerging dangers.

Mechanical polish aside, the game’s characters are just cool. They’re a diverse bunch of adventurers including women and people of colour, which would no doubt have horrified Lovecraft. There’s an African-American pulp hero who bears striking similarities to an archaeologist played by Harrison Ford (and whose home state is helpfully listed as Indiana for anyone who doesn’t get the allusion). There’s a shotgun-toting nun who supplements her religious fervour with some serious firepower. You can even play as the nigh-unkillable Russian mystic Grigori Rasputin.

It’s an approach that’s likely to disgust Lovecraft purists. But in embracing the idea of Cthulhu as 21st-century kitsch, Death May Die frees itself from literary baggage and focuses squarely on fun. It’s a loving pastiche of Lovecraftian fiction. At times it also feels like a gentle, self-deprecating dig at American-style big-box game design. It never misses an opportunity to throw more dice, more cards, more action, fire, explosions and randomness into the mix, and it does so with an unapologetic and infectious glee.

The final result is as loopy as a cultist who’s stayed up all night reading the Necronomicon. And even to a confirmed Lovecraft-basher like me, it’s incredibly entertaining.