See who won
If you click on a link and make a purchase we may receive a small commission. Read our editorial policy.
About The Great Wall

Awaken Realms, the creator of Kickstarter hits Tainted Grail: The Fall of Avalon, Nemesis and Etherfields, has launched its latest big board game project: The Great Wall.

A semi-co-operative game, The Great Wall puts up to four players in the shoes of army generals in Ancient China. Each commands their own workers and soldiers in pursuit of the most ‘honour points’ by the end of the two- to three-hour game, but must also work with their rival commanders to fend off attacking Mongolian forces controlled by the game.

During each round, the players assign their workers to various spots around the board. Actions are issued using order cards played facedown, before being revealed and performed in the order given by the tea track, which can change during the course of play.

Each of the 11 locations’ actions only activates when all of its worker-placement slots are filled, allowing multiple players to work together to gain a benefit - or nab a spot to share the advantage with an opponent. Co-operation is encouraged, as players earn a penalty for occupying all of a location’s slots by themselves.

Actions include collecting resources, hiring troops and gaining advisors that grant various bonuses to different actions. (We've played a prototype copy of The Great Wall you can see below and in the main image - expect more from Dicebreaker soon!) 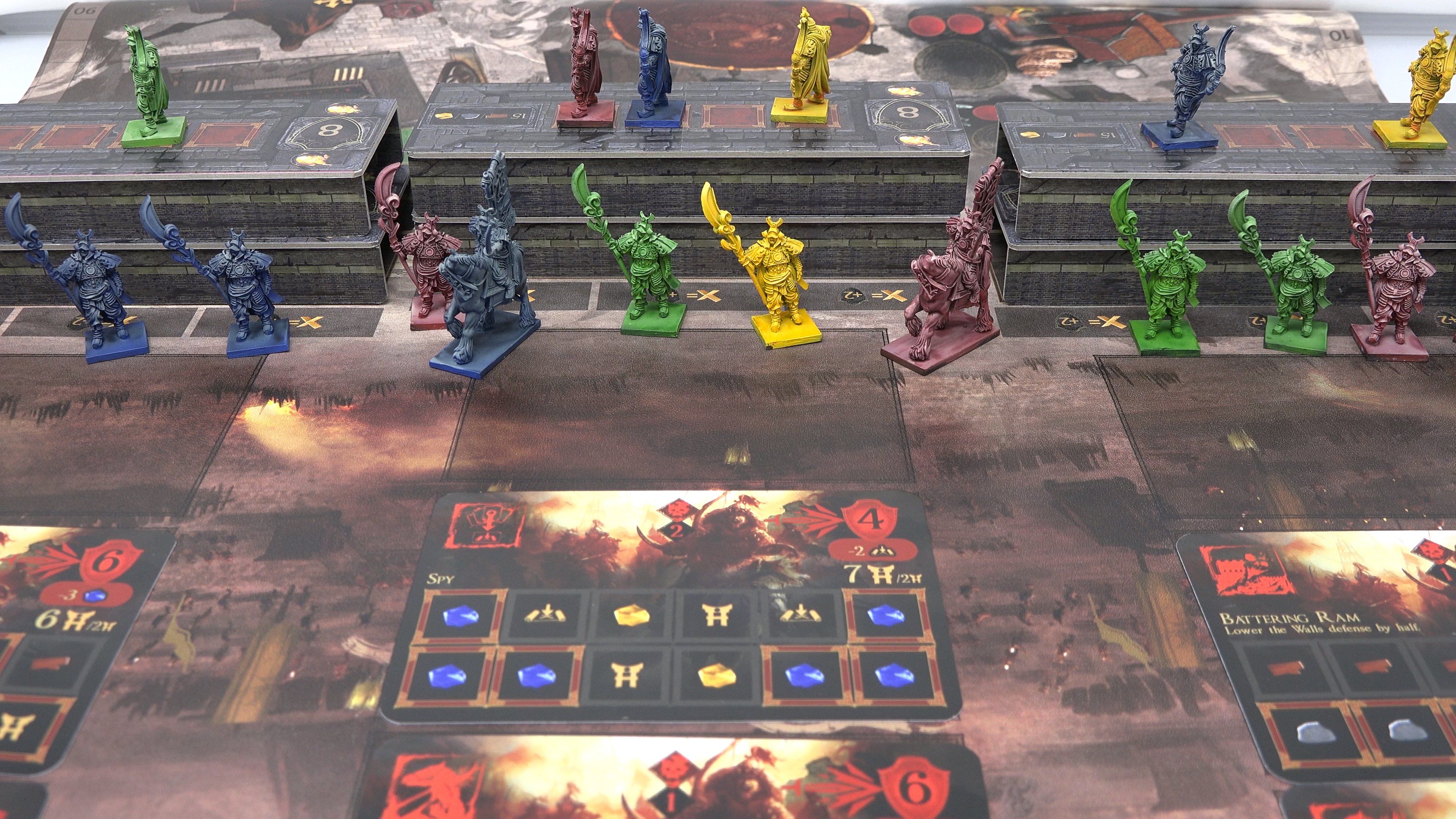 After gathering their resources and building up their armies, the players defend the Great Wall - represented by 3D terrain on the board - from the AI attackers. Different types of troops - cavalry, archers and infantry - are placed on Mongolion horde cards spread between the three sections of the wall, with tactics cards and the asymmetric abilities of each general adding extra effects. The combat is said to allow for combos between units’ abilities and other effects, letting players activate their forces in strategic ways to prevail.

Defeating the attackers yields honour points and resources, but if the players’ combined strength isn’t enough to hold back the attackers in a section of the wall everybody suffers the penalty on the horde cards - so, again, teamwork is key. After each wave, the players can contribute resources to repair sections of the wall which, again, earns them points.

After reaching its initial £40,000 goal on Kickstarter in five minutes, The Great Wall’s campaign now sits at more than £1 million pledged by nearly 17,000 backers.

There are two backer tiers. The £45 (plus £13 shipping) Tiger pledge gets you the ‘meeple version’ of the core box with wooden meeples to represent players’ workers. The £90 (plus £16 shipping) Dragon pledge bumps the figures up to plastic miniatures. Both tiers include all of the campaign’s unlocked stretch goals - so far it’s blown past the targets for a fully co-operative mode, Genhis Khan expansion, ‘quality upgrades’ to the game’s cards, board and walls, plus a fifth-player expansion.

The Great Wall’s Kickstarter campaign runs until December 17th, with the game expected to arrive with backers in October 2020. A retail release is yet to be confirmed.