Vote for your favourite tabletop games of the year!

Vote now
If you click on a link and make a purchase we may receive a small commission. Read our editorial policy.
About Star Wars: X-Wing Miniatures Game

One of the world's greatest X-Wing Miniatures Game players is a 19-year-old kid from a small, medieval town in North East England. By day (and by night), Simeon Dellapina works gruelling shifts in a Burton upon Trent warehouse, but his off-hours are spent theorycrafting ship loadouts and optimising his point distribution - ensuring that his teensy squadron of plastic starfighters are powerful enough to punch through shield generators, and agile enough to avoid deep space ambushes.

All that obsession is rewarded at the tournaments Dellapina plays in. It's utterly engrossing to watch him at his best; bushy brown hair tumbles over his translucent spectacles as, once again, his fleet puts its target in an icky, untenable position. X-Wing was built for casual players in mind - no assembly required, no paint needed - but its rampant popularity guaranteed that a hardcore contingent would be willing to push the game to the outer limits.

And so, last June, Dellapina hoisted his World Championship title above his head, cementing his status as the best dogfighter in the galaxy.

"My life is consumed by X-Wing," he explains, "Even if I'm only doing one tournament in a weekend, usually it's a big one - Swiss [rounds] and then a cut. It's all I do as far as social interaction goes. It takes over every aspect of yourself, if you let it get to this point."

If Dellapina sounds exhausted by his self-imposed asceticism, that's because it's as demanding as it looks. Shortly after his victory, Dellapina took a two month hiatus from X-Wing - the longest he's stepped away from the game since he started taking it seriously back in 2014. Part of that is a deserved prize fighter's offseason, but it also represents one of the stranger paradoxes in the competitive tabletop infrastructure. Dellapina didn't make any money from his X-Wing Championship win. In fact, the only way he was able to attend the tournament, which is hosted each year at the Fantasy Flight Game Center in Roseville, Minnesota, is because his old man was willing to split the travel and lodging expenditures to get him there safely. (Naturally, Dellapina's dad is also a proud member of the X-Wing community.)

This puts Simeon in a strange position. He's a transcendent talent, a chummy member of the community and uniquely in love with X-Wing. And yet, his talent would've gone nationally unrecognised if not for the generosity of a supremely understanding father. His hustle will never be anything more than a side project; the only way he survives in this scene is if he keeps up the willpower to win the weekend clashes, and study the meta reports, and board the 12-hour flights across the Atlantic to reassert his dominance.

Everyone you talk to in the scene echoes the same hardcore dream. The 2019 champion, crowned in October, is a teacher named Oliver Pocknell from Bath. He takes part in four international tournaments a year, where he usually splits an Airbnb with a small group of other X-Wing friends and rivals. "It takes some planning as you have to work out how much you can afford and holiday costs," he says. "Shoestring budgets go a long way."

This is a tall order, especially when there's no money on the line. So naturally, the X-Wing diehards are holding out for a sea change. 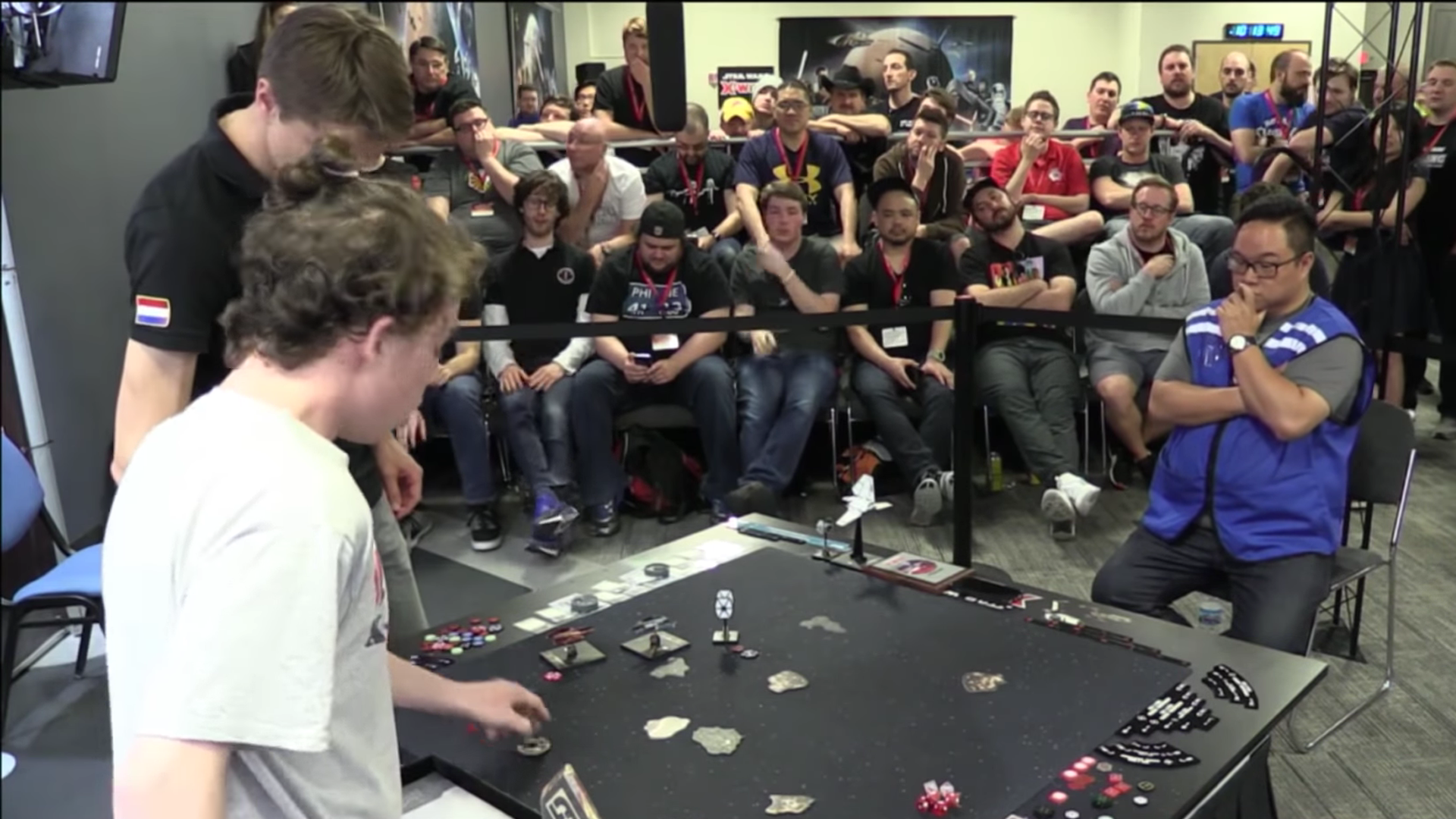 "If you look at the tournament scene in Magic [The Gathering], and you take the prize structure in that, and the prize money in that, [and bring it to X-Wing,] it would pretty much become an esport," says Dellapina.

"Personally I’m trying to raise the profile of the game as much as I can, and using the pedestal of World Champion will hopefully help with that," adds Pocknell. "What I would like to see from tabletop games is to see them taken seriously but also retain their core of community. I know that those two things are difficult to mix but, as most of my close friends are also technically my opponents when I meet them at a tournament, there is nothing to say it can’t happen."

To be clear, these two players are proud outliers. The X-Wing Miniatures Game was released in 2014, with a rebalanced second edition arriving last year, and it's designed to be played on dining room tables - within the kinship of friends and family members - who wish to relive the eternal clashes between the Empire and Rebellion on a two-dimensional plane. By every available metric, publisher Fantasy Flight Games' pitch worked beautifully; X-Wing has slowly but surely uprooted grognard standbys like Warhammer and Warmachine thanks, in part, to its abbreviated price point and simplified ruleset.

Naturally, a significant portion of X-Wing's competitive scene skews casual; Dellapina describes them as 30-something dads with a small collection of plastic ships and a rare free Saturday evening. As always, the lifers exist on the exotic outskirts, much like how 67 million League of Legends players distill into approximately 200-or-so professional players of the computer game MOBA.

If you look at the tournament scene in Magic [The Gathering], and you take the prize structure in that, and the prize money in that, [and bring it to X-Wing,] it would pretty much become an esport.

Still, Fantasy Flight has installed a fairly rigorous qualification process into X-Wing's competitive format. In 2019, access to compete in the World Championship is restricted solely to those who secure an invitation. Players earn those invitations by placing high in regional brackets, which allows access to higher-tier tournaments. The prizes on the line there include a specialised set of dice, alternative card art and a plaque embossed with both your status as a finalist and the visage of Boba Fett. Most importantly, some of the biggest winners of these tournaments not only received a Worlds invitation, but also airfare and accommodation from Fantasy Flight, which represents one of the few times Fantasy Flight has offered to put up money for its X-Wing disciples.

The lack of monetary value here isn't surprising. It's become abundantly clear that Fantasy Flight prefers to regard its corresponding competitive community as a group of extremely dedicated fans, rather than professional agents. Yes, there are gainfully employed Magic: The Gathering players, but miniature games, despite their legendary place in the industry due to the likes of Warhammer 40,000 and the ludicrous financial demands to keep up with the meta, have never been blessed with the same treatment. X-Wing pros have learned to live with a professional-level hobby that will always leave them in the red.

Ryan Staniszewski, a 30-year-old in Michigan who works as a 3D modeller, was one of the eight finalists at the 2018 World Championship. He tells me he tries to look at every tournament like a family reunion; the chance to catch up with old friends, and old rivals, justifying the cash-sink to participate in the scene on a more spiritual level.

"Winning is almost a secondary goal," he explains. "'It's like, 'If I do well: cool. If not, I had a great time with the people around me, because they make it a great environment.'"

Staniszewski represents the endgame for a lot of serious X-Wing players. He is married to both his wife and his day job. Eventually they will have kids, and he regards that inevitability as the death knell for his competitive miniatures career; it's hard to keep a baby alive and burn entire evenings dreaming up new Wedge Antilles compositions. If he has a suggestion for Fantasy Flight, it'd be to implement some sort of grandmaster system - where the most consistent performers in the X-Wing scene are guaranteed, at the very least, a plane ticket to Worlds. He cites great players like Jaren Foss who lives in Sydney, and is forced to miss out on a number of major tournaments simply because it's difficult to travel back and forth between Australia and America for nothing more than the faint promise of new, shiny dice.

"I don't see a future where a miniatures game player is professional, and can do that as their full-time job," says Staniszewski. "But I can see a state where, maybe when Fantasy Flight grows further and this second edition of X-Wing provides them more resources, maybe they can offer a higher level of prize money. Maybe they can guarantee more people positions and hotels in their national, continental and world-based events." 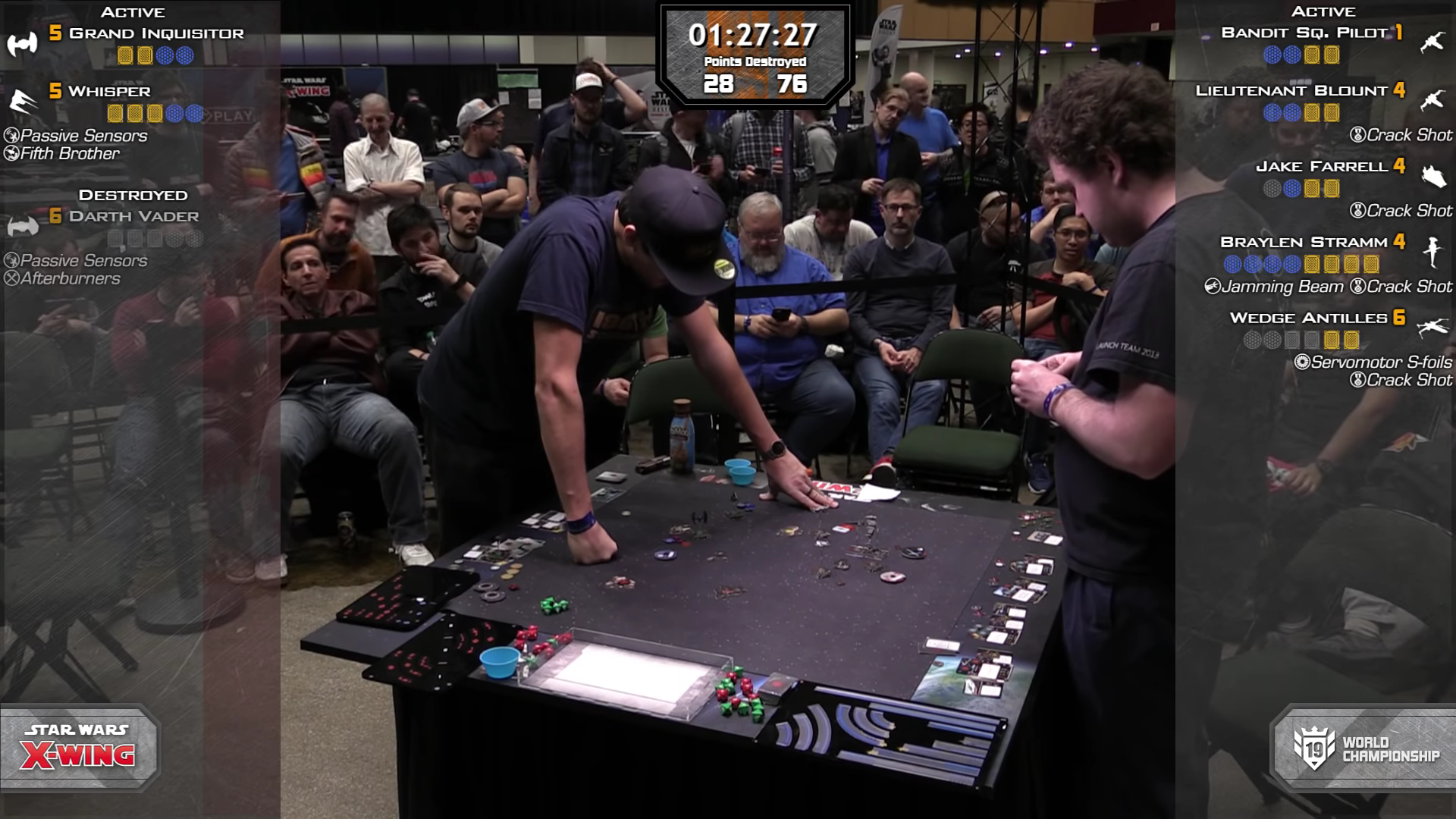 Staniszewski is right. We've yet to live in a world where miniatures gaming is treated like a spectator sport. But 2019 has taught us that nothing is off the table. We've watched Twitch revitalize a 2007 incarnation of RuneScape, we've witnessed Marshmello playing Fortnite in a Los Angeles stadium full of screaming teenagers, we've watched Wizards of the Coast translate tabletop tournaments to esports environments with its Magic: The Gathering Mythic Championships. X-Wing might not be there yet, but the idea of Fantasy Flight doing organising and professionalising its community sure sounds a lot less crazy than ever before; it wouldn't be the first time a company made a crazy bet in our wild new labour economy.

Still, these kind of measures can have weird, unforeseen cultural ramifications. Pocknell says he'd absolutely sign up for a more comprehensive budgetary system for players in X-Wing, but he's also aware of how that might morph the community underneath his feet.

"It is my hope that X-Wing aligns itself a little more with the MTG competitive structure. I think it can increase viewership and interest is always a good thing," he explains. "You will have to manage toxicity levels as the introduction of bigger events and bigger prizes will inevitably bring with it higher levels of attention and stress. The aim of winning can override all else for a lot of people, especially when money gets involved. "

At the very least, it would make Dellapina's dreams come true. He wants to leave the warehouse behind and become the first ever full-time X-Wing player. It's an incredibly audacious fantasy, and one that feels shockingly in reach if the stars align. He'll keep chasing it, one proton torpedo at a time.

"I'd be able to thrive," he says, as he thinks of a timeline where he could quit his job to focus all of his energies on X-Wing. "It all comes down to where the money comes from."